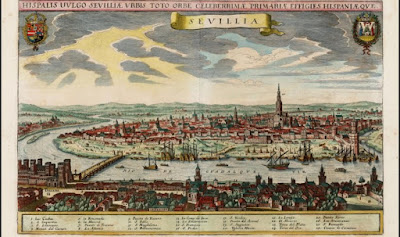 The Legends tells that Seville was founded by Hercules. But according to historians, the Seville area flourished during the Tharsis reign. The Phoenicians and Greeks maintained commercial relations with Tharsis. During the 8th century BC, their descendants created a city on the shores of the Guadalquivir and named it Ispal. It would be later called Hispalis and is considered to be the origin of Seville.

From the 3rd century BC, the Carthaginians occupied the area but they were defeated by the Roman, Scipio Africanus in 206 BC. From then on, Seville entered into an age of splendor. This was even truer when Julius Caesar gave Seville the status of colony in 45 BC. The surprising fact is that, nowadays, there is little rest of this flourishing roman period.

During that period, various invasions took place, particularly Vandals and Visigoths. The latter dominated Seville during the 6th and 7th centuries. This is when Seville became the most important cultural area in the Occident. The great figure of that time was the archbishop San Isidoro, who wrote Etymologies, the encyclopedia gathering all the knowledge of those days.

In 712 started the domination of the Arabs over Sevilla, that they called at that time Isbiliah. The Betis river was also renamed Guad el Kevir. Those two names are the origin of the current names of Seville and Guadalquivir river. Under the Arab ruling, Seville entered into another age of splendor. When the Almohades arrived in 1147, they transferred the center of the power from Cordoba to Seville and made it their capital. From this last period of the Arab-Andalusian domination remain the Giralda, the Torre del Oro, the Alcazar (later rebuilt by the Christian kings) and the Macarena wall (Muralla de la Macarena).

In 1248, Ferdinand III The Saint conquested Seville for Christianity. Muslims were forced to leave whereas Mudejars and Hebrews stayed. Seville was repopulated with some 24.000 Castilians who grouped together in different neighborhoods according to their occupations. This led to the creation of brotherhoods that still exist nowadays and to the attribution of patron saints for each.
A lot of churches were built to replace the mosques. Ferdinand III transferred the Kingdom of Castile Court to the Alcazar of Seville. He stayed there until he died in 1252 and is considered as Seville’s patron saint.
Ferdinand III’s son, Alfonso X, continued his father’s work. He established a tolerant reign which enabled the Jewish, Arab and Christian’s knowledge to boom.

Under Peter I of Castile (1350-69), the city grew in an extraordinary way. The Alcazar was rebuilt and transformed in a beautiful mudejar palace.

In 1401,started the Gothic-style Cathedral  that was built over the Big Mosque. However the Giralda as well as the patio de los naranjos (Orange trees courtyard) were kept.

The overtaking of Granada in 1492 marked the end of the Reconquest process; the Jews were expelled and Seville became the headquarters of the Inquisition. In 1492 Christopher Columbus discovered America. From then on, Seville experienced its apogee. Indeed, the Chamber of Commerce was created to deal with the trade relations between Spain and the overseas territories.
The new American market as well as the monopoly of Seville on the trade relations brought it much wealth. Seville became the wealthiest city of Spain as well as the most cosmopolitan.  In the XVI Seville was the capital of the world. Most of important countries made trade with Seville because of the spicies, gold, silver etc... It was the main reason of this rich age of culture at the city.

In 1519, Carlos I of Spain (Carlos V of Germany) became emperor. Spain became the most powerful nation in Europe, although the constant wars of the empire ruined a big part of the wealth coming to the port.
The territory of the city expanded and the population grew up to 150.000 inhabitants at the end of 15th century. Three famous painters actually were born in Seville at that time: Velazquez (1599), Murillo (1617) and Valdes Leal (1622).

Nonetheless, the 17th century saw the decline of Seville. After a plague epidemic in 1649 divided the population by two, the Guadalquivir got stuck in 1680. The India fleet was moved to Cadix, soon followed by the whole Chamber of Commerce. Seville however kept its monopoly on tobacco and a huge plant was built to this end. Nowadays, this plant houses Seville’s university.

After the Independence war and another plague epidemic in the 19th century, Seville experienced another period of prosperity under Queen Elisabeth, who implemented urban reforms, in particular the construction of the Elisabeth II bridge (Puente Isabel II) in 1845 and the collapse of the wall around the city in 1869, which gave birth to new roads and squares.

During the 20th century, Seville hosted two expositions that modified its landscapes. In 1929, Seville welcome the Latin-American exposition, the aim of which was to strengthen the Andalusian economy. Several houses representing various countries were built for this exposition and still exist nowadays. 63 years later, in 1992, Seville hosted another big exposition: the Universal Exposition 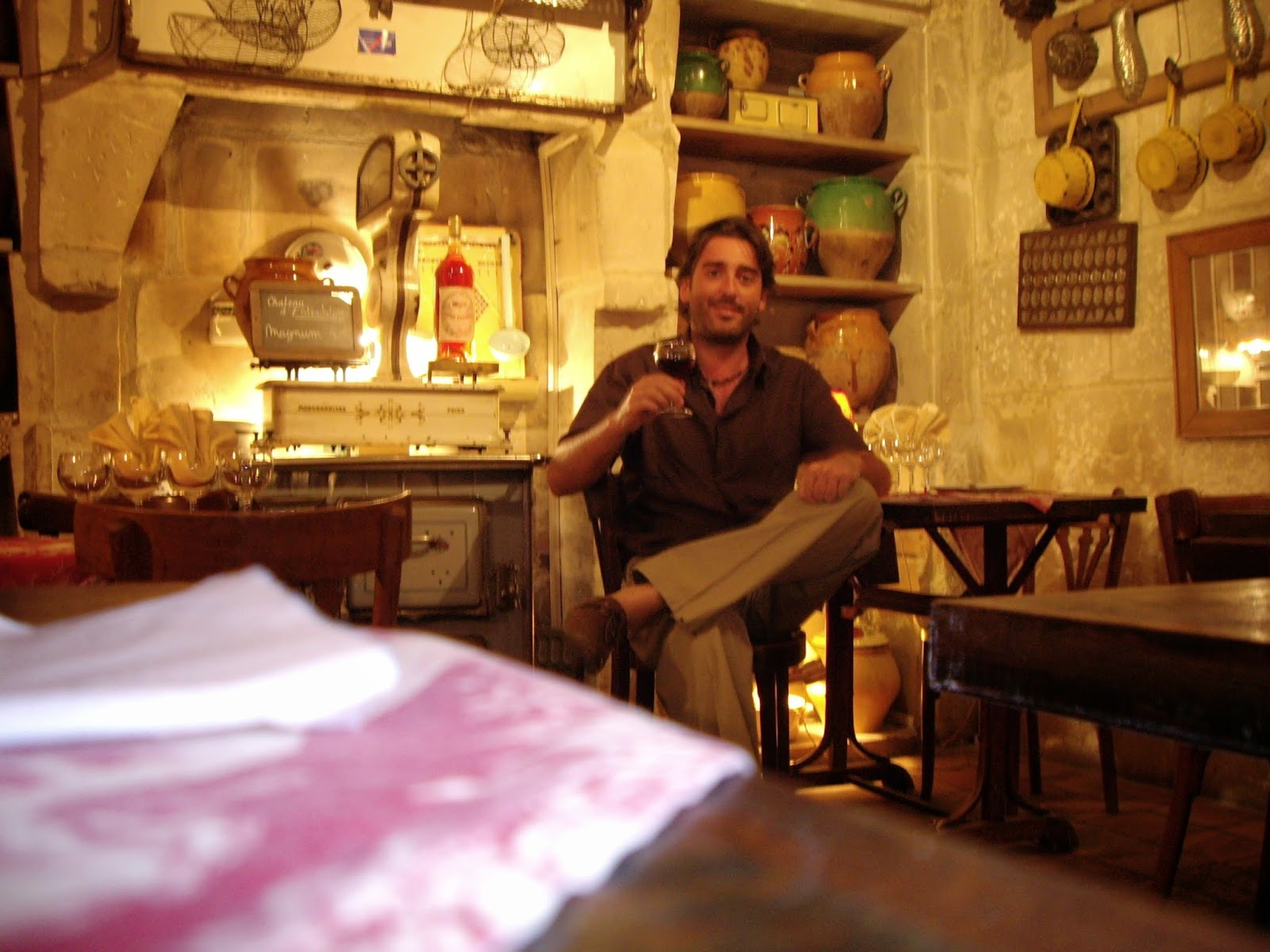 My name is Juan. I  was born in Ecija ( a beautiful village in the Province ) . I moved with my family to Sevilla at the age of 5.

Im a lawyer and tax advisor. Im also partner in TARTESSOS ONLINE  a company that trades with delicatessen foods and wines from Andalucia. I love travelling and I love my city and whole Andalucia. This is why i decided to make this blog and help the travellers from all over the world to discover the authentic Seville. The history, the culture, the gastronomy....the local traditions, the markets.

As i have not to much time im writing slowly but im doing this blog with too much passion and taking care about details.

I hope that you enjoy Seville , the history, the culture and  i hope to help you to find good tapas bars, restaurantes and places for a coffee, long drinks etc....

I hope you enjoy visiting my blog and discovering our beautiful and rich land. Also maybe you are interesting to import our excellent products to your country. If you are thinking about invest in Andalucia buying a property , establishing a company etc....you can also email to my tax-law firm.

I will be happy to receive an email from you:

I hope you really enjoy our fantastic city and Region.

WHAT TO SEE. MONUMENTS AND MUSEUMS . EVENTS


WHAT TO SEE. MONUMENTS
AND MUSEUMS 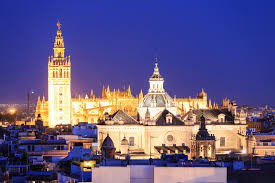 Hello Friends. Welcome to the city of Seville. As for sure there are people much more  specialist than myself  in historic heritage im going to give you the official website of tourism of Seville what is pretty good website not only for information about monuments , museums etc..but also for events at the city. ( You can find Schedules, opening hours, phone numbers etc.. )   www.visitasevilla.es

Then if you have not too much time or you dont like to visit so much monuments the list will be useful. Please look the location in google maps. Will be really easy for you.


1. CATHEDRAL OF SEVILLE AND GIRALDA
One of our best monument in the City. The magnificient Cathedral of Seville. 3rd biggest in the world. The tower of the Giralda was built by the muslims and then the cristians renovated and added the highest part ( where the bells are ) after the reconquer of Spain . Right part of the Giralda is the where the muslim church was originally.  The starting of the build of the gothic cathedral is dated on XV century. Around 1401 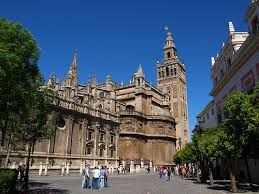 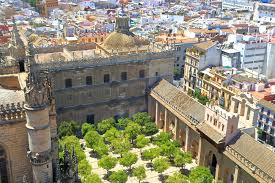 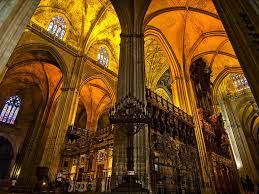 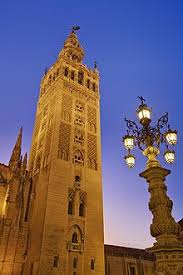 2.ROYAL ALCAZAR OF SEVILLE
Another jewel of Seville. The palace was built by the muslims Kings. After the reconquer of Sevilla by the Cristians they renovated and added some spaces. I call it our small Alhambra 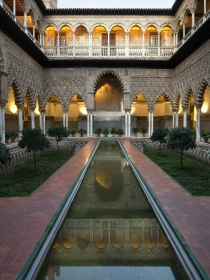 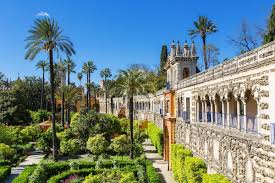 3.SANTA CRUZ AREA. HOSPITAL DE LOS VENERABLES ( Its the area just next the the Cathedral and Giralda what is lovely for walking or enjoy some tapas .Its the old jew town ). Inside Santa Cruz Area you can visit the hospital de los venerables 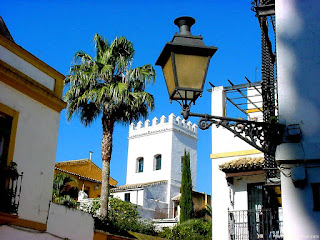 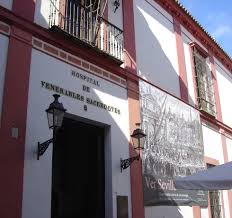 It was the first big tobacco factory built in Europe. The scenario of  the story of the famous Opera Carmen was there. Carmen was an employee of the factory 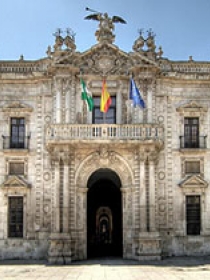 
( All the files , contracts maps etc. about the discoverment of America are inside this building. The gold and Silver tower are very nearby than the archive. It was the storage for the gold and silver we brought from America).

Plaza de España was the main and central square of the Iberoamerican Expo celebrated in Seville in 1929. Its really nice square . Also you can enjoy beautiful walking in the Maria Luisa Park which is in front of that square. 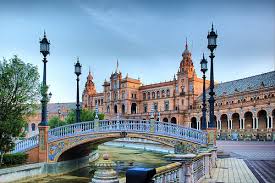 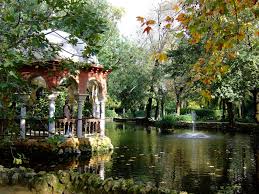 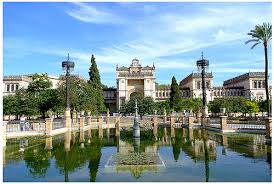 9. A WALKING BY TRIANA AREA.
Enjoy a walking on this area . Its just crossing the bridge of Triana at the End of Reyes Catolicos Street, next to Paseo Colon. Its nice to walking on this area. You can find nice tapas bar next to the River in Betis Street. I recommend to visit the Market of Triana.Also the Museum of Ceramic its interesting.

About adress schedules etc..you can find everything in www.visitasevilla.es